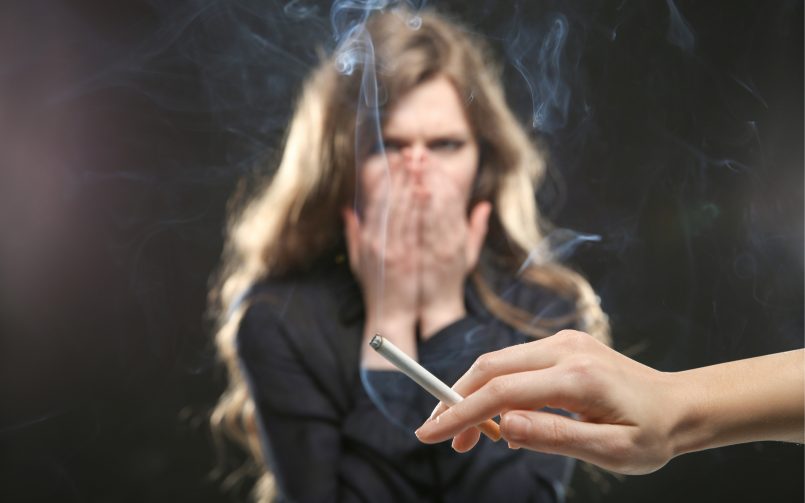 The smoke that burns off the end of a cigarette or cigar actually contains more harmful substances than the smoke inhaled by the smoker, as there is no filter it must pass through.

If you are a non-smoker but are exposed to passive smoke on a regular basis, your body will still absorb nicotine and other harmful substances. Smoke contains more than 4000 chemical compounds, of which 250 are toxic and more than 50 are known cancer-causing agents.

These dangerous substances linger in the air for approximately 4 hours and breathing in these particles for only minutes can harm you.

20-30 minutes – causes excess blood clotting, as well as increases the buildup of fat deposits in blood vessels, increasing the risk of heart attack and stroke.

·     2 hours – increases the chance of irregular heart beat (arrhythmia) and can trigger a fatal cardiac event or heart attack.

·     Lung cancer and lung disease, including COPD, emphysema, asthma, and chronic bronchitis. Nonsmokers who live with a smoker have a 20% to 30% increased risk for developing lung cancer.

Population greatest risk of being harmed by passive smoking:

Although any person who spends time around those who smoke has an increased chance of developing a smoking-related illness, certain people are extremely susceptible to the harmful effects of passive smoke.

1)Service industry workers, such as bartenders and restaurant servers.

2)Pregnant women. Passive-smoke harms not only the mother-to-be, but her unborn child as well.

·     Frequent colds and respiratory infections (including bronchitis and pneumonia)

·     May experience slow or incomplete lung growth and development

·     Learning and behaviour problems, including inattention and aggression.

·     Increased likelihood that the children themselves will become smokers

·     Increased risk of tumors and cancer shown in cats, dogs, and birds

·     Whenever possible, ask visitors to your home to smoke outside and to use a “smoking coat” or sweatshirt so that they will not carry toxins on their clothes (this is actually known as “third-hand smoke”).;

·     Open windows and use fans to ventilate rooms in your home and work.

·     Tell babysitters and other caregivers not to smoke around your children, even if it is in their own home.

·     If you are visiting a smoker’s home with your children, try to socialize outside whenever possible.

·     If smoking is allowed where you work, talk to your employer about modifying the company’s smoking policy. Encourage them to support a program to help their employees quit!

·     Ask to work near other non-smokers or as far away from smokers as possible.

·     Stay informed about any changes in federal, state, and local smoking laws and become involved in strengthening those laws.