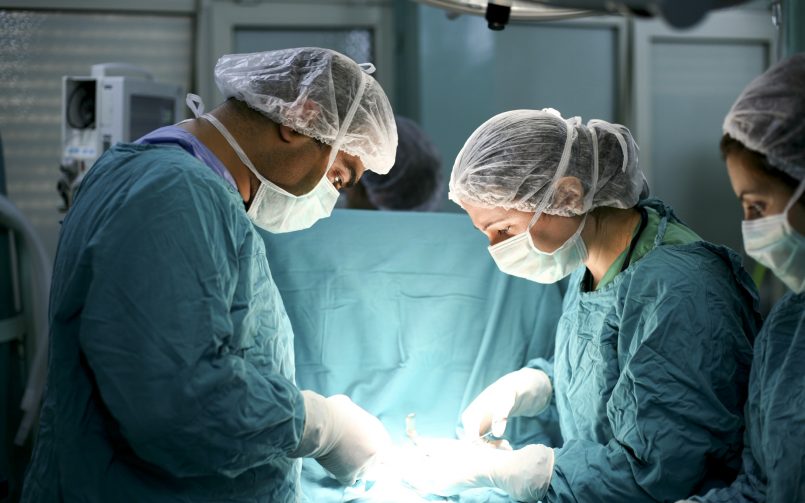 Mr Ajay Singh a 40 year old security guard fractured his hand few days was admitted in the emergency department at Wockhardt Hospital in a poor clinical condition. He was brought on ventilator support and had also suffered traumatic head injury to his head and was in semi-comatose state. No pulse was felt in his upper arm limbs due to the injury. Dr Girish L Bhalerao an experienced orthopaedic surgeon at Mira Road Hospital examined the patient. On observation by Dr Bhalerao patient has severe injuries to his arm and skin was removed (fasciotomy). The skin had in due course turned blackish brown and showed signs of deterioration or ischemia. His fingers were dark blackish blue showing signs of reduced oxygen and blood supply to the arm.

Patient’s condition was deteriorating and vitals had reached a critical level. The blood pressure was dropping, pulse was racing and he was severely dehydrated due to the extended injury caused. Blood reports showed that the kidney was shutting down. Patient was also suffering with uncontrollable diabetes, alcohol withdrawal symptoms and electrolyte imbalance.

Dr Bhalerao diagnosed the patient with impending compartment syndrome due to fracture of humerus. The fracture had reduced blood circulation to the forearm and fingers. He had oedema (fluid accumulation) cyanosis (bluish discolouration) spreading to the chest area.

Though patient was of poor financial status Dr Bhalerao spoke, to relatives of the serious condition of the patient and that it was now imperative that the patient be moved to the intensive care department for managing the case more effectively and prudently.

Dr. Manish Hinduja and ER doctors Dr Sharad and Dr Hazel assisted Dr Bhalerao to alleviate the dropping health parameters and status of patient. However due to certain falling health parameters diagnostic investigation could not carried out as it might be risky. Doctors had to rely solely on their clinical judgment and skills to manage the patient. It was decided that the fracture site needed to be explored with surgical intervention.

The next course of action due to complicated nature of the fracture he case was orthopaedic surgical intervention by Dr Girish to explore the fracture site and to determine the cause of poor blood circulation.

Patient was brought in for surgery to fix the fracture and decompression of the compartment at the OT. On exploring the site Dr Girish observed that the fracture was impinging on major arterial vessels in the forearm and arm causing the occlusion of the vessels. Dr Girish not only repaired the fracture but isolated and restored the damaged neurovascular bundle. After the repair Dr Manish Hinduja assessed the blood circulation in the arteries in the arms and confirmed that the circulation was restored. Embolectomy was not required as blood flow was re-established in the limb.

Within 24 hours the patient condition improved and all vital parameters including blood profile was dramatically improving. Patient’s condition was reaching a stable condition. The trauma site was recovering well.

On recovering Mr Ajay was very grateful to all the team of doctors, especially Dr Bhalerao and Dr Manish at Wockhardt Hospital. It was a complete team effort with commendable efforts put in by the emergency medical services, intensive care services and operation theatre for promptly managing the case and saving the patient’s life He also appreciated the overall management and logistic support by the hospital for his care and medical intervention.